The Role of the Intergalactic Shaman - Part 1 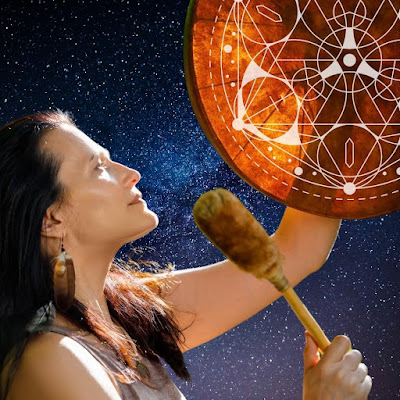 When I first learned that my Shamanic calling went beyond the boundaries of Gaia and even our home galaxy, I wasn't sure what would be required of me. In fact, as I sit down to type this post I'm not 100% on what it means. This is a very new job title that comes with where humanity is at in terms of connecting with our Star Family. It is also something that can only happen now, at this point in the evolutionary journey of Gaia herself, thanks to Her frequency being raised sufficiently for the workings of an Intergalactic nature to be anchored properly into her core and crystal grid.

I'm seeking answers by writing this article. That is why I place myself in channelling mode and a light trance as I type. I want these answers to come directly from Spirit so I'm not looking at what others who use similar job descriptions are doing. That said, there is no need to reinvent the wheel. The title itself contains enough clues to get us started, so let's break it down.

What Is a Shaman?

A Shaman is someone who works on behalf of their people to bring about healing/soul retrieval, as well as to protect their people from impending disaster by being able to read the signs in Nature, as well as by receiving messages in Dreamtime. A Shaman is someone who is able to travel up and down the Tree of Life and to connect with spirits in the lower, middle, and upper worlds. A Shaman is a sort of go-between for the human and spirit realms. The shaman can also function as psychopomp and help souls transition into the spirit realm, as well as guide earthbound souls to the light.

So what's different when you realise that your mission blueprint is for the job an Intergalactic Shaman rather than a regular Shaman? Well, you are no longer just working with spirits linked to Gaia. You are an emissary of the great Intergalactic Council because it is in their interest to oversee that the evolutionary process on Earth is completed in harmony with the whole of the Universe.

It's not about trying to control the process (that would go against Cosmic Law) but about offering support to Gaia and humanity wherever needed. The Intergalactic Shaman can for this reason draw on the support of Interdimensional beings from many different star systems and dimensions.

This, in turn, means learning different techniques and channelling knowledge into the Earth realm that can be used to resolve issues and problems that are blocking the path of progress. Innovation is a big part of the role of the Intergalactic Shaman. So yes, in that sense, we are called on to 'reinvent' the wheel. We cannot simply learn an already tried and tested cultural system of shamanism and hope that it will do the job. It won't as humanity ascends.

It can also be argued that this is a job that is only for those of us who don't care that we might get labelled 'outsiders.' Most likely, we've carried that label off and on before receiving our Intergalactic Shamanic calling in this incarnation. It is totally fine and part of the initiatory path of the Shaman to be seen as a bit of an outsider. That is often how s/he gets chosen for the job in the first instance. In my own experience, the choosing came in my teens, in the country that would become my home country many years down the line.

This outsidership is another common trait of the Earth and Intergalactic Shamans alike--we end up working in and being adopted by a foreign tribe/nation. In my native Sweden, the Völva/Shaman/Seeress was often referred to as 'Heid.' This is not thought to have been an actual name but a label used about someone coming from the outside (the heathland). We know, for instance, that many of the Seeresses employed by the Vikings were Saami women. The Goddess Freyja is seen by some as the original Heid (Gullveig transformed after being tried by fire three times).

Oh, and of course--It's a job for Starseeds (click HERE to find out if you are one), some of whom will be incarnating on Earth for the very first time, though most have had several test runs. And yes, those test runs were all leading up to this exact juncture in Earth's history. Rest assured that the Starseeds wgi are here now will have received plenty of training in both the Akashic Records and the Halls of Amenti before coming here. Many of us arrived with partial past life memories encoded in our DNA via our chosen bloodlines in order to facilitate adaptation to Earth's environment. These encoded 'past life memories' typically lack the emotional charge of actual past life memories.

Often the training to do the job that is in our mission blueprint begins a long time before we realise what our true purpose actually is. The start of our training is typically triggered by some form of healing crisis. This is to ensure that all the spiritual work we do is with an aim to achieve healing for ourselves and others. In other words, we don't typically dabble in occult and metaphysical modalities to increase our personal power or for financial gain.

Starseeds who have signed up for the role of Intergalactic Shaman also come in as emissaries and ambassadors. This is because to do the work, we need to liaise with beings in other star systems and dimensions. However, this part of the work doesn't become apparent to us until some time after we have connected with at least one of our Star Families. And even then, it can take time to assimilate and integrate the knowledge about our mission for it to make sense here in the third dimension. We often dismiss actual transmissions as 'fantasy,' at least initially. It takes some patience on behalf of our Spirit Team to get through to us, for sure!