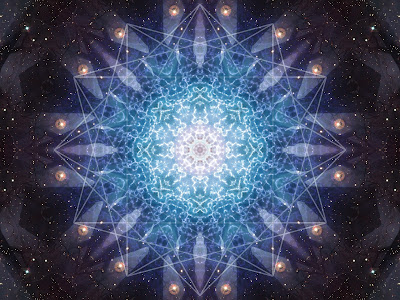 Earlier this morning, I watched a great video that explained higher dimensions with great clarity. You can watch it for yourself HERE. Before watching this video, I didn't really have a clear intellectual concept of any dimension beyond the fourth. As you probably already know, the fourth dimension is the dimension of time.

Moving up to the 5th dimension, a being that lives in a 5D world can go back in time, change decisions and experience being different locations at the same time. However, they would not be able to visit their other self. Instead, they would have to go back in time to where the timeline split and progress along the other timeline in order to meet their future self on the other timeline.

The 7th dimension is where things start getting really interesting. Here different points of origin for the parallel universes become a possibility. 7D beings can have a limitless number of personality expressions and have no time-space limitations imposed on them.

In the 8th dimension, there are no physical beings. You can still perceive visually and by hearing but what you perceive may appear out of nothing and disappear again just as quickly. That is akin to our virtual reality.

A 9D universe can have its own laws of physics so that, for instance, civilizations can be overlaid on top of each other, yet unaware of the existence of the other civilizations/universes they are nestled together with. 9D beings can jump from one existence to another at will.

The 10th dimension is known as the God dimensions. 10D beings have power that we would percieve as limitless. They are the creators of universes, galaxies and species. Because not everything can be explained by this 10th dimensions scientists hypothesise that an 11th dimension must also exist but not much is know about it.

As interesting as it was to learn about the different dimensions, my main takeaway from the video was actually about the strings themselves. I gained such a clear and profound of WHY everything is vibration. It was a truly magical moment.

Scientists don't know what the strings come from but I find it uncanny how in Norse Mythology, Frigga, the Mother Goddess, is a weaver of fate, as are the three main Norns. Some higher force weaves existence into being, deciding what density it should have by how these strings vibrate and interact on a subatomic level... But to what end? I still have more questions than answers.

Why 5D in Pop Spirituality?

Learning all of the above, I'm curious why so many are so keen to a) skip evolving through the 4th dimension and b) aiming straight for the 5th. Why not go for the 6th straight away if we are skipping? It's almost as if 5D has become a trope that is equivalent to the Judeo-Christian 'holier than thou.' Yet, just as many religious folks have no idea about what it means to be holy, many New Agers have no idea about what the 5th dimension means and why they are aiming for or imagining that they are living in it.

The Power of the Imagination

Mind you, I'm not dissing imagination here. It is totally through our imagination that we are able to get a glimpse of higher dimensions. I'm sure even scientists would agree with that.

It's after pushing my own imagination with the Your Origin Story exerercise I shared on Angelorum yesterday that I decided to really try to gain a better understanding of higher dimensional reality. And I'm so glad I did because now I have a whole hoard of questions that I get to questing with!