The Northern Mysteries are Merging with the Mysteries of the Stars 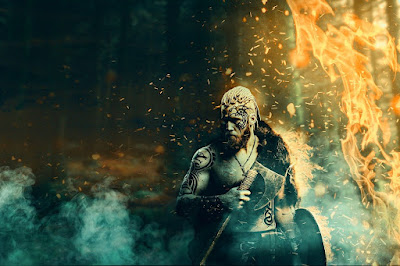 Mercury is retrograde as of yesterday so I am going back over my sites and thinking about what to keep, what to improve and what to get rid of. I've come to the conclusion that it is superfluous for me to have a site that is separate for the Northern Mysteries. So I'm putting Lyfjaberg on hold for now and looking into maybe merging the posts from there with this blog.

Firstly, I have already started blogging about the Northern Mysteries on my main blog, Angelorum, from the point of view of how to connect with the Gods. Secondly, I feel that the Northern Mysteries are starting to merge more and more with my Starseed journey. The Gods of my Norse ancestors are leading me to work with intergalactic dragons, for instance, so there is no hard division between my Star Family work and that of diving into the Norse belief system.

A couple of the dragons I have connected with recently have revealed themselves as aspects of Norse Deities. That should come as no surprise as many of the gods are adept at shapeshifting and dragons feature in the Norse myths. The most famous dragon in the Norse Myths is Fafnir who was once a man who shapeshifted into a dragon. We also have the dragon heads at the helms of the viking longships. Sadly, the lore behind this custom is lost but I'm fairly sure we can assume the dragons were seen as allies of the Vikings, rather than foes. The only surviving Norse tales sadly depict dragons as evil.

What I was never going to do with my Northern Mysteries blog was attempt historic reconstruction of the Viking era faith. We have moved on from there mentally, from an evolutionary point of view. Not in the sense of viewing the Gods as mere archetyps (though some of course do) but in terms of our place in the Cosmos, realising that we are not alone in the Universe and understanding the Nine Worlds in terms of quantum physics and different dimensions. Perhaps the most interesting theory to me right now, is the One Mind theory.

A Global Thinning of the Veil

And as the days go by, it seems the veil is getting thinner and thinner. Are more and more of us able to tap into the One Mind aka the Universal Consciousness? Is this making it possible for the Gods and other entities to reach out to us once more? I believe this could be true. Of course, I could be wrong. I don't mind either way... All I know is that I am able to interact with the Gods as if and they are teaching me things not part of the attested Norse source materials. UPG is where it's at for me now. I'll still keep studying attested sources though.

But there really is no need for me to start rehashing those same sources that so many bloggers and authors have already been over. Everyone seems to reach different conclusions about who and what the Gods actually are and how we ought to approach/worship them today. It's a bit like the hundreds or even thousands different denominations of Christians.

With every faith, there are as many different belief systems as there are believers... and that's okay. It's okay because we are dealing with the numinous realm and that realm is always filtered through the subjective lens of the individual consciousness. Though hopefully, with daily practice (yes, meditation!), that lens is purified to allow for more of the One Mind.

I wrote my Substack Newsletter the other day and I apologise beforehand for quoting myself but this bears repeating:

In my opinion, the Elder Futhark Runes are the key that the Gods left for us to understand the Northern Mysteries. Unlike the Eddas, the Runes have not been tainted. I feel the same about the bastardisation of the Norse Myths as I do about the tampering with the Bible. You can tell the Beast has slobbered all over both; both have been dumbed down, stripped of the deeper esoteric teachings, and used to manipulate the masses. Maybe one day, we will find the Norse equivalent of the Nag Hammadi Gnostic Gospels.

The Gnostic Gospels clearly reflect more of the One Mind consciousness than does the Bible.

There is very little hinting at Universal Consciousness in the Norse SoChanting individual runes is akin to chanting Hindu mantras. Chanting the runes can help us tap into the One Mind.

In the end, what it comes down to for me is, 'Does it work and is it useful in terms of the Highest Good?' Greater access to and understanding of the One Mind/Universal Consciousness is very useful right now. Humanity needs to grow up fast and cast off the shackles of the Beast if we truly wish to enter into the Age of the Holy Spirit (aka the 6th Sun or the Age of Aquarius). The Beast's favourite trick is to make us think we are separate from Source.