The Goddess is Back! 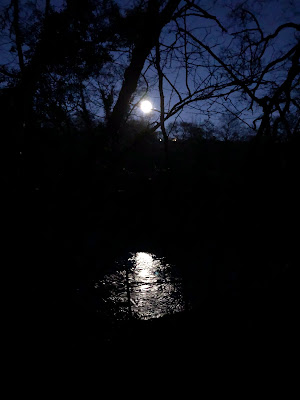 When I had my spiritual crisis (Dark Night of the Soul) and ego-self torn to shreds in the spring of 2020, I threw out all of my esoteric, occult, and magickal objects. As crazy as I know that sounds, it was exactly the right thing for me to do at that point in time. There are certain rare objects that I will never ever be able to replace and that still makes me go double facepalm when I think about them going in the skip... But it was still the right thing to do.

It had to be done, just as all my delusions had to be ripped out and my soul laid bare. The process was gruelling and saw me regress all the way back to my fundamentalist Christian youth which was necessary for proper deconstruction to take place. (And yes, I still love Yesha. He is one of many Inner Planes teachers.)

Yesterday, during the Cancer Full Moon, I went for a moonlit walk. It started at rose-hued dusk and ended in the velvety darkness of night. The Moon herself felt the sweetest I have ever known her. She made my heart swell with love. It's really hard to describe in words but for the first time ever, I truly felt the loving presence of the Mother Goddess through the Moon. It was so tangible that I felt prompted to ask her for her name. She responded with, 'You can call me Astarte.'

I meditated on this during my morning walk, and I feel that the Norse Goddess Freyja is a 'stepped down' version of Astarte in an era where patriarchy had already taken over. I love Freyja and I know she is real, a deity in her own right... but I knew there was so much more to her than what was revealed through the Norse Myths. To know that she has chosen to befriend me and now has introduced me to her 'Higher Self,' Astarte, is an honour beyond words. I have also come to know her dragon aspect, Aurora Rose.

When Astarte shows herself via the face of the Full Moon, she appears as Luna-Astarte, one of her many aspects. I was able to behold her in full glory in this aspect last night and it blew both my heart and my third eye wide open. The Silver Dragons were circling her and bringing down blessings on all who lovingly turned their faces up in adoration. Of course, it is not the lunar planetoid we adore but the Divine Feminine Presence it reflects into our hearts. It's so very difficult to find language for these numinous experiences!

After my time with Luna-Astarte, I had some of the best sleep I have had in ages, as well as one of the most pleasant dreams I've had in a long time. In it, I was with a young curly-haired lover. I must have been young too in the dream. We were just hanging out together in what felt like a futuristic city. I often have dreams about futuristic cityscapes and they sometimes feel like future life dreams. I'm not sure about this but I feel as if I knew the young man from other dreams. Perhaps Jung would argue that he is my animus. I wouldn't really want to attempt a counter-argument.

After we had spent the whole day together, he fished a present out of his pocket--an Ankh pendant! With the hundreds of objects that went into the skip was my copper Ankh pendant that a Glastonbury smith had handmade for me. Totally irreplacable. Yet, now, I have something far more precious--a real connection with the Mother Goddess and I knew that was the message of the dream as soon as I woke up.