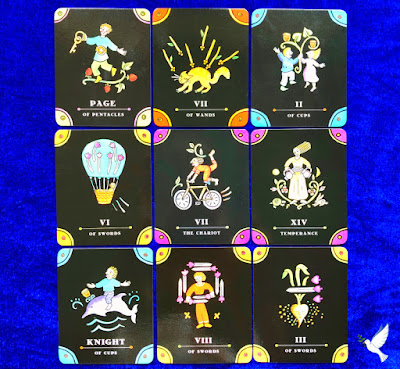 For this reading about the recent Health Secretary reshuffle, we are reading with The Complete Tarot Kit by Running Press. I'm not going to speculate about whether the affair was real or staged, though clearly the timing for the release of the video of Hancock and his married mistress recorded in May was carefully planned. Regardless, it was the trigger for the long since prophecied moment of Hancock being 'fed to the lions.'

I will keep this short and to the point. In the lefthand column we have the past. The present is in the middle column and the future is in the righthand column. The 'present' represents the brief transitional period of this weekend (26-25 June, 2021).

Looking at the past column, we see that Matt Hancock who is represented by the 6 of Swords (Mercury in Aquarius), though thinking himself quite the cleverclogs was seen as the useful messenger boy. Some would say 'useful idiot' but Hancock is not an idiot. He really is very clever. However, even clever people screw up. We all like to cheer when this happens to sociopaths.

The hidden influences in the past column tells me that Gina Coladangelo is to Matt what Carrie is to Boris. She's his NWO handler. The question is, did she or her boss set him up? Had he ceased to be useful in his current position. The fact that he most definitely is a NWO puppet does bode well for future career prospects though. Perhaps he will get a position within the UN, WHO or WEF.

In the middle column, we have no small victory for the people. Though they released the video to create precisely the reaction that followed, it did wake even more people up. The Beast that has been the hunter is becoming the hunted.

The central card (The Chariot) signifying the current transitional phase for the new Health Secretary reveals that this was a victory for the NWO puppet masters in terms of getting rid of the useful messenger boy who ceased to be useful. However, it also reveals that they are now also in a bind about the messaging and controlling people via MSM. It's no longer possible to keep lying about the number of protesters, calling it a few hundred when more than a million actually took to the streets.

The police know the real numbers and so does every single Londoner by now. The livestreams went out and there is no comeback for that. We've all seen the enormity of the protests now. Even Mike Wendling, Chief Disinformant at the BBC, would struggle to label everyone who turned up a rightwing extremist. They've lost that angle good and proper now. So it's fair to say they are a bit stumped. Things are NOT going to plan even though they have their new man in place.

Is Sajid Javid a Dark Horse though? Some have suggested he's a WEF Trojan. That may well be the case but sometimes people change and have their own personal awakenings. Is that what we see in the future position of the middle row which represents the future for Javid as Health Secretary? Temperance is a card of soul alchemy and it also represents someone who is a true visionary.

When I look at the 2 of Cups, I get the term 'populist' in my head. Javid wants to be loved by the people and he may actually try making sure that happens by not destroying the country with continuous future lockdowns. Now that might explain why the hidden powers that rule from behind the scenes will not be happy with their choice (3 of Swords) after all.

As for the time period covered here, it doesn't go beyond the next 12 months but for now it does look like Javid may bring temporary relief and some improvements that were not planned by the globalist masters who are busy implementing the Great Reset.

Please, Sajid, be a Dark Horse for the people and not a Trojan for the WEF! I'll keep you in my prayers.