Alien disclosure by Medvedev... or a joke? Tarot reading

ETA 21 May 2021 - Replaced the video since the old one had been taken down. Rebooting this blog today under new guardianship, working with an interdimensional Collective which includes Star Family, Angels, Elementals and Ancestors.

On the 2012 Scenario, I came across this video clip with Russian PM Medvedev being asked a question about aliens (posted a few days ago on YouTube). It starts out sounding genuine but ends like a gag with a mention of MiB... Sooo... is there any truth to the statement or is Medvedev making fun of the journalists (and viewers)?


Could Russia be preparing people for full on alien disclosure? It's been said in various forums that this was how it would be done... Snippets would get leaked to get the masses 'warmed up' in order to prevent panic.

Even if it was a joke, can there be a joke without a grain of truth?

Anyhoo, I asked the Tarot cards if this was indeed an alien disclosure and what else I needed to know... and got the following result: 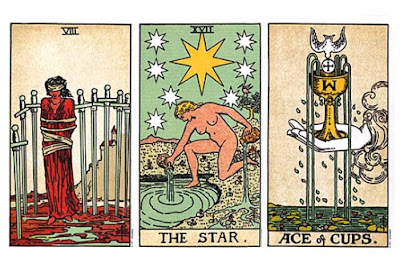 I see this as Medvedev's hands being tied from telling the truth in a more direct manner... (8 of Swords) and yes, this is just the beginning of the alien disclosures - there will be more. When The Star shows up in this type of reading, I take it as an affirmative that aliens are involved (our connection to the Stars). The Aces are 'yes' for yes / no type questions.